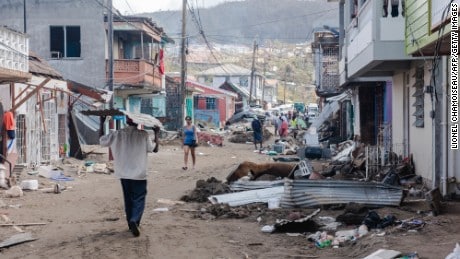 Hurricane Maria made its first landfall on the Caribbean island nation of Dominica on Monday, September 18, as a Category 5 storm with winds topping 160 mph – the strongest hurricane on record to make landfall there. Days later, the storm devastated the U.S. territory of Puerto Rico.
Maria is the first Category 4 hurricane to directly impact Puerto Rico in 85 years
Nearly the entire population of Puerto Rico — more than 3 million American citizens — are without electricity in Puerto Rico, nearly a week after Maria made landfall on Wednesday, September 20
It could take four to six months until power is restored, officials there say
Puerto Rico had not yet fully recovered from Hurricane Irma, which pummelled the island with high winds just two weeks earlier